By Judy McConnell
Posted on January 31, 2018 in Featured Article and Rust

2017 was a big year for the Rust systems programming language. Now, members of the open source project are looking to consolidate last year’s progress – making Rust easier to learn and use – and publish the first major update to the stable 2015 Rust release.

“We’re making Rust a much nicer place to be,” said Aaron Turon, a Rust core team member and engineering manager at Mozilla. “We’re working to create a more productive environment for programmers – especially those new to the language.”

Before setting the 2018 roadmap, Rust project leaders conducted a survey and asked for blog posts from the community about what they’d like to see this year. The results? More than 5,000 survey responses and 90 blog posts – and a lot of consensus around the core direction for the year: enhancing productivity of Rust developers. You can see an early draft of the Rust 2018 roadmap; the community expects to finalize the document in late February.

Interest in Rust is growing. This year’s survey got nearly 40% more responses than last year’s, and respondents had a marked interest in developing on a variety of platforms, including mobile, web, and embedded.

Already dozens of companies are using the systems programming language in their production environments. There is a growing list of use cases for Rust as well, from building industrial-strength operating systems, databases and game engines to running highly performant applications on resource-constrained devices like the Raspberry Pi. More use cases means a greater need for skilled Rust programmers.

We think it’s time to trumpet from the mountaintops what the Rust community has known for a while: Rust is production ready.
– Carol Nichols, engineer at Integer32

Rust was created in 2006 as an alternative to C/C++. Today, it is broadly compelling because it combines safety and speed, empowering programmers to take on more ambitious projects. Rust:

Next up: Polish and Refine

Many of the goals for Rust in 2018 revolve around refinement and usability. These key projects can make it easier for programmers to get up to speed with Rust and be productive: 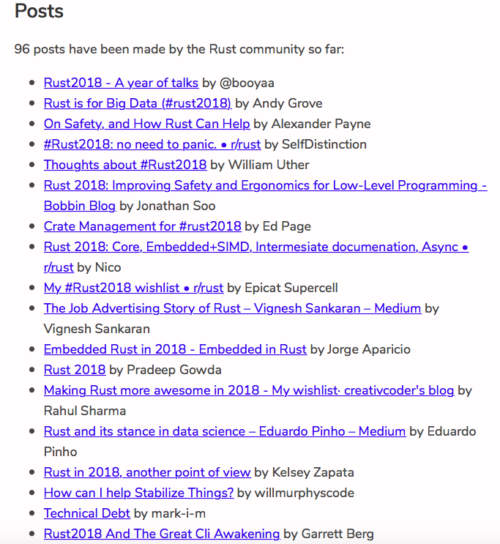 The Rust community is also excited to ship the results of its 2017 ergonomics initiative. That work focused on finding and fixing rough edges in the core language, making routine tasks less frustrating for new users.

Four weeks ago, I picked up Rust again, and the language is SO MUCH EASIER than it was the last time I tried it in May 2016. – Julia Evans, engineer at Stripe

As more and more developers gain experience with Rust, the community is keeping pace, with plans to publish new documentation, including new books and resources for intermediate Rust programmers.

Lastly, project leaders are looking at ways to grow the Rust community across borders and continents, connecting to programmers in China, India, South America, and elsewhere. A major step in this direction will be localization, so that Rust documentation is accessible to the global community.

We did good work in 2017: now we have to make sure the world knows it and can use it. – Niko Matsakis, engineer at Mozilla