An inside look at Quantum DOM Scheduling

Use of multi-tab browsing is becoming heavier than ever as people spend more time on services like Facebook, Twitter, YouTube, Netflix, and Google Docs, making them a part of their daily life and work on the Internet.

Quantum DOM: Scheduling is a significant piece of Project Quantum, which focuses on making Firefox more responsive, especially when lots of tabs are open. In this article, we’ll describe problems we identified in multi-tab browsing, the solutions we figured out, the current status of Quantum DOM, and opportunities for contribution to the project.

Since multiprocess Firefox (e10s) was first enabled in Firefox 48, web content tabs now run in separate content processes in order to reduce overcrowding of OS resources in a given process. However, after further research, we found that the task queue of the main thread in the content process was still crowded with tasks in multiple categories. The tasks in the content process can come from a number of possible sources: through IPC (interprocess communication) from the main process (e.g. for input events, network data, and vsync), directly from web pages (e.g. from setTimeout, requestIdleCallback, or postMessage), or internally in the content process (e.g. for garbage collection or telemetry tasks). For better responsiveness, we’ve learned to prioritize tasks for user inputs and vsync above tasks for requestIdleCallback and garbage collection.

Inside Firefox, tasks running in foreground and background tabs are executed in First-Come-First-Served order, in a single task queue. It is quite reasonable to prioritize the foreground tasks over than the background ones, in order to increase the responsiveness of the user experience for Firefox users.

Let’s take a look at how we approached these two scheduling challenges, breaking them into a series of actions leading to achievable goals: 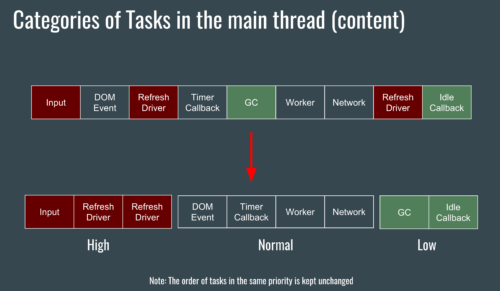 To resolve our first problem, we divide the task queue of the main thread in the content processes into 3 prioritized queues: High (User Input and Refresh Driver), Normal (DOM Event, Networking, TimerCallback, WorkerMessage), and Low (Garbage Collection, IdleCallback). Note: The order of tasks of the same priority is kept unchanged.

Before describing the solution to our second problem, let’s define a TabGroup as a set of open tabs that are associated via window.opener and window.parent. In the HTML standard, this is called a unit of related browsing contexts. Tasks are isolated and cannot affect each other if they belong to different TabGroups. Task grouping ensures that tasks from the same TabGroup are run in order while allowing us to interrupt tasks from background TabGroups in order to run tasks from a foreground TabGroup.

In Firefox internals, each window/document contains a reference to the TabGroup object it belongs to, which provides a set of useful dispatch APIs. These APIs make it easier for Firefox developers to associate a task with a particular TabGroup.

How tasks are grouped inside Firefox

Here are several examples to show how we group tasks in various categories inside Firefox:

With the new association of DOM windows to their TabGroups and the new dispatching API provided in TabGroup, we can now associate this task with the appropriate TabGroup and specify the TaskCategory:

To group tasks that have no TabGroup dependencies, a special group called SystemGroup is introduced. Then, the PokeGC() method can be revised as shown here:

We have now grouped this GCTimerFired task to the SystemGroup with TaskCategory::GC specified. This allows the scheduler to interrupt the task to run tasks for any foreground tab. 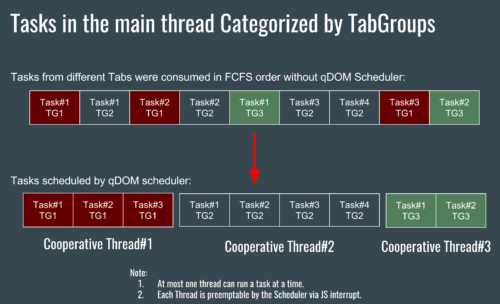 In this new cooperative-thread approach, we ensure that only one thread at a time can run a task. This allocates more CPU time to the foreground TabGroup and also ensures internal data correctness in Firefox, which includes many services, managers, and data designed intentionally as singleton objects.

Obstacles to task grouping and scheduling

It’s clear that the performance of Quantum-DOM scheduling is highly dependent on the work of task grouping. Ideally, we’d expect that each task should be associated with only one TabGroup. In reality, however, some tasks are designed to serve multiple TabGroups, which require refactoring in advance in order to support grouping, and not all the tasks can be grouped in time before scheduler is ready to be enabled. Hence, to enable the scheduler aggressively before all tasks are grouped, the following design is adopted to disable the preemption temporarily when an ungrouped task arrives because we never know which TabGroup this ungrouped task belongs to. 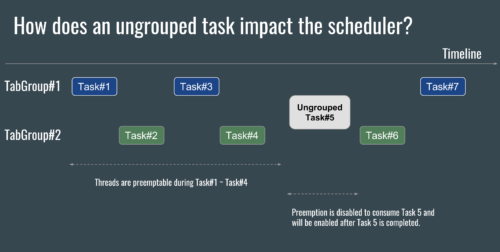 We’d like to send thanks to the many engineers from various sub-modules including DOM, Graphic, ImageLib, Media, Layout, Network, Security, etc., who’ve helped clear these ungrouped (unlabeled) tasks according to the frequency shown in telemetry results.

The table below shows telemetry records of tasks running in the content process, providing a better picture of what Firefox is actually doing: 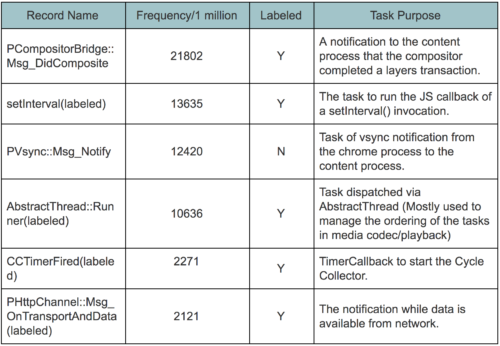 The good news is that over 80% of tasks (weighted with frequency) have cleared recently. However, there are still a fair amount of anonymous tasks to be cleared. Additional telemetry will help check the mean time between 2 ungrouped tasks arriving to the main thread. The larger the mean time, the more performance gain we’ll see from Quantum-DOM Scheduler.

As mentioned above, the more tasks are grouped (labeled), the more benefit we gain from the scheduler. If you are interested in contributing to Quantum-DOM, here are some ways you can help:

If you get started fixing bugs and run into issues or questions, you can usually find the Quantum DOM team in Mozilla’s #content IRC channel.

Bevis Tseng is a platform engineer at Mozilla who used to work on telephony-related features in Firefox OS (B2G). He has completed the enhancement of IndexedDB in Gecko for Spec v2 recently and now is involving in the task labeling for Quantum-DOM scheduler.