The convergence of Internet-based IPTV, Video-on-Demand (VoD) and traditional broadcasting is happening now. As more and more web technology comes to television, the gap between web apps and native apps is rapidly narrowing.

Firefox OS now supports the TV Manager API, a baseline of the W3C TV Control API (the editor’s draft driven by the TV Control API Community Group), which allows web-based applications to acquire information such as the Electronic Program Guide (or EPG) from service providers, and also to manage native TV hardware such as tuners and remotes. Firefox OS also relies on multiple API specifications to fully support TV functionality on a web platform. Some APIs are still on the road to becoming standards. Here is an overview of some common TV functions which can be implemented today via these Web APIs. 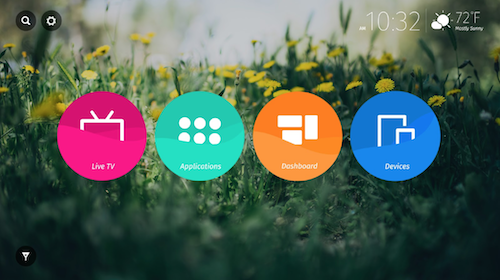 One of the primary goals of the TV Control API is to enable standard use cases, such as channel switching and other activities generally available and expected in conventional remote controls. The API exposes specific tuner, channel, and EPG information to the web app and also allows indirect interactions with the tuner modules. Some applications, like virtual remote control, are easy to enable with this API. And the web content has the flexibility to manipulate multiple tuners if resource-permitted. In addition, event-driven notifications about channel scanning status and EPG updates provide a dynamic way to access broadcasting information.

The following example shows how to get the available tuners and set the current playing source via the API.

When it comes to TV streaming, multiple web specifications work together. The Media Capture and Streams API enables access to multimedia streams from local devices, and it defines a MediaStream interface to carry video/audio tracks and other stream-relevant attributes. The current streaming data for each tuner can be wrapped in a MediaStream instance and retrieved via the TV Control API. Then the web content can start playing the stream by assigning it to HTML5 <video> elements. Here’s an example:

The Media Capture and Streams API and the HTML5 <video> element provide attributes and methods to help manage streaming contents. Combining the APIs and HTML5 elements makes the development of some advanced TV streaming scenarios, such as concurrent display for multiple streams (i.e., Picture-in-Picture), easier to accomplish and more flexible.

While playing video streams, sometimes the media content provides multiple audio channels and even includes subtitles. For instance, a film or a sports show may be broadcast with multiple supported languages available for the viewer to select. Thus, there are two lists of VideoTrack and AudioTrack objects in the HTML5 <video> element to help the web content utilize available video and audio tracks respectively. Meanwhile, the Media Capture and Streams API also provides certain methods to dynamically manage associated media tracks. With this flexibility, web content is able to play a video stream that’s originated from another connected device, such as a camera.

The HTML5 <video> element has a list of TextTrack instances. These tracks can be associated with a specific video tag to represent different instances, such as subtitles, captions, and metadata. In addition, multiple TextTrackCue objects containing time-sensitive data can be affiliated with them, and used to control timing of the display for subtitles and captions.

The MediaStream Recording API provides a MediaRecorder interface to fulfill recording requirements over the MediaStream. It lets the web content select the appropriate supported encoding format for the stream, and also enables the recorded media to be accessed either as a whole blob or in smaller buffers.

In cooperation with the Task Scheduler API and Service Workers, you can even add DVR-style scheduling functionality to your web app or web-driven device. On the other hand, the EPG data retrieved via TV Control API may also help the application record specific TV programs.

Sometimes a public alert may be sent out via TV broadcasting or other communication systems when an emergency or natural disaster occurs such an earthquake, tsunami, or hurricane. A corresponding event-triggering mechanism included with the TV Control API can be used to help a web application manage an alert.

TV broadcast mechanisms and applications are on a fast track to evolve rapidly, as is the web technology. Since many of the web specifications and APIs mentioned are still in the standardization progress, more functionality or further improvements might be added to make television experience more webby. As always, you can contribute to the evolution of these Web APIs by following along on relevant standards mailing lists and filing bugs when you find them.