By Robert Nyman [Editor emeritus]
Posted on May 15, 2014 in Developer Tools and Feedback channels

Editor’s Note: Thanks to everyone who took the time to share constructive feedback and ideas for Firefox Devtools via our UserVoice channel. This forum is no longer available. We’ve decided to move the conversation over to the mozilla.dev.developer-tools Google group, where the conversation is lively, and Firefox DevTools team members are available to answer questions and respond to comments. See you there! (March 2016). 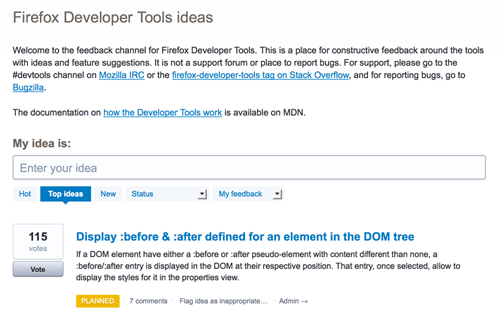 Looking at the first week for Developer Tools feedback

During the first week for our Developer Tools feedback channel, we got:

Mozilla has responded to 97% of the ideas, out of which:

Notable is that many ideas that came up are things that we already have bugs for in Bugzilla and ideas and approaches that have been talked about and considered.

So, sincerely, thank you for all the input and constructive ideas and comments! We appreciate it a lot and by having this direct dialog and communication with you, it helps us to build better and more useful Developer Tools!

Please continue to express your ideas, vote on existing ones and stay on track with the progress!